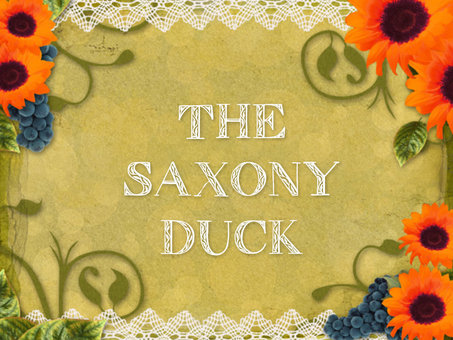 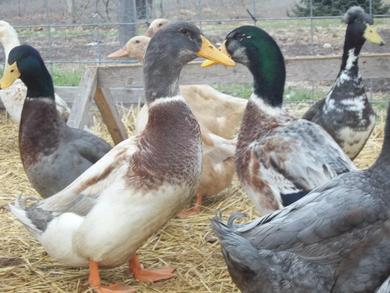 "These Ducks are important to preserve because they are such a beautiful breed with a calm disposition. They stand out to me." Tonya

Description
The Saxony typically weighs from 9-10 lbs and is classified as a "Heavy" breed. Both males and females have brown eyes. In the male the head is a powder blue with a white neck ring. The chest is a claret brown. The upper back has silver darkening to bluish gray over the rump area. The body has an oatmeal shading with creamy white. The bill is yellow to greenish yellow with black bean in mature birds. The Hen's color is totally different from the male although they do share some same colors. Her head and neck are fawn-buff highlighted with with bold white stripes across the eyes. She has creamy white highlights on her throat and front of neck. Her body is fawn-buff with some bluish shading. She has oatmeal colored wings highlighted with blue-gray, silver and creamy white. Her beak is yellowish to brownish orange with a dark bean in mature birds.

History
As the name clearly states this breed was developed in Germany. The time era was around the first half of the twentieth century about 1930ish. The breeder of this beautiful bird was Albert Franz. This breed was almost wiped out by World War II. Albert began breeding again and the breed was recognized in Germany in 1957. It is recorded that he used Rouen, German Pekin and Blue Pomeranian Ducks to create the Saxony.
Dave Holderread, a leader and icon in Waterfowl (Which is where all of my Saxony stock come from) imported Saxonys into the US from Germany in 1984 to his farm located in Oregon. He helped establish this breed here in the US and is responsible for the APA acceptance of the Saxony in 2000.
The Saxony is an all-purpose Duck which means they are good for meat and eggs. They are excellent layers capable of laying over 200 large white eggs a year. They will even incubate and raise their own young.

"I have found them to be very hardy birds, they love to forage and they adapt to pretty much any environment you give them. They make awesome pets and love attention." Tonya

I will be getting more Saxony stock in May from Holderread's Waterfowl Farm.